Are You Building a Cathedral? 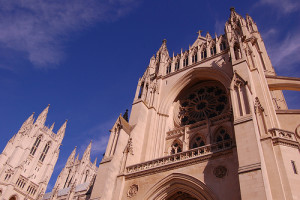 Each of those men performed the same task, but they had different perspectives on why they were doing it...

Last month I attended a professional development and networking luncheon. (It was more interesting than it sounds.) Something from that lunch has stuck with me – and I don’t mean the dozens of announcements or painfully basic tips on getting involved in social media.

During a conversation about the characteristics that make up a leader, the facilitator of our discussion told a story:

Each of those men performed the same task, but they had different perspectives on why they were doing it. The point of that story, as I’m sure you can figure out, is that a leader is someone who not only completes the task at hand, but also understands how it fits into the larger goal and shares the vision of that bigger picture.

And I realized I’d learned more about leadership than I’d initially thought. Leadership is more than being in charge, being the boss of somebody. It’s more than a fancy office or an impressive title. It’s more than having underlings follow your directions; it’s more than having underlings. (Who calls them “underlings,” anyway?) Leadership is about stewardship. It’s about understanding that each item on our to-do list is part of a goal, a vision. Even when it’s not fun. Or seemingly important. Or glamorous, rewarding, gratifying. And it’s about doing those things well, because the bigger picture is more important than the tedium, the boredom, the sweat, the tears.

It’s remembering that writing 300 press releases in one month, while repetitive, is my contribution to the success of 650 small businesses across this country. It’s remembering that balancing my checkbook, though boring and full of math, is the accountability that keeps my family within the budget that will free us from debt. It’s remembering that changing diapers, while at times disgusting, is a gesture of love to my daughter. I become a leader – even when I’m just leading myself – when I treat my tasks as part of the bigger picture that I believe in. And – no big surprise here – it’s when I do just that, that those tasks become more interesting and more meaningful.

Your to-do list may look different than mine, but we can all create a cathedral with even our most mundane tasks.

What is your cathedral today?