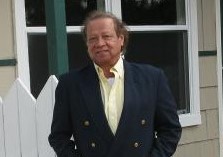 Remodeling houses presents an interesting balance between my intellectual life and my architectural creativity...

Every week we’re going to share a story with you from someone who’s found their freedom with United Country. From buyers to sellers, from brokers to managers – everyone in the United Country family has a story.

Today’s post is about Ollie Oviedo, a United Country client in Portales, NM.

For most people, earning a Ph.D. and teaching university courses about writing, literature and the philosophy of fairy tales would be enough to keep them busy. But Ollie Oviedo, Ph.D., isn’t most people.

Born in Columbia, South America, Oviedo came to the United States in 1964 to attend New York University. After earning his Ph.D. in comparative literature and teaching in New York City, New Jersey and California, Oviedo moved to Portales in 1989 to serve as the director of Eastern New Mexico University’s writing program. An associate professor of English and consultant for several publishers, Oviedo has authored and edited several books in literature, critical theory and digital technology theory. His essays have appeared in U.S. and international scholarly journals.

Since 2006, Oviedo has renovated 10 houses in Portales that were previously not livable. “I like the challenge of bringing a house back to life and making it safe to live in,” he said. “Remodeling houses presents an interesting balance between my intellectual life and my architectural creativity, and I enjoy working with different architectural styles and materials.” On one particular block, Oviedo has remodeled four houses, bringing them up to acceptable living standards with new windows, plumbing and electrical improvements.

This progress encouraged other investors and home owners to work on properties in the neighborhood as well, turning around an area that was once deteriorating. In just four years, Oviedo has significantly contributed to the Portales community by turning unlivable houses into affordable quality homes. As he has bought and sold property in Portales, he’s learned as much about real estate as he has home renovation. “United Country – Vista Nueva appreciates my desire to make these houses safe, affordable, attractive and livable again, and they do whatever it takes to help me do it.”

Thank you, Dr. Oviedo, for using your “freedom” to contribute to your community!