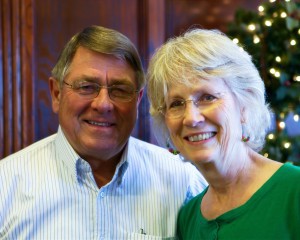 Just over a year ago, Alvin Beadles, CAI, AARE, CES, joined the United Country family. He and his wife, Phyllis, opened a United Country franchise in Thomas, Okla., and he worked closely with our Auction Services division as well. And now, much too soon, both Alvin and Phyllis have passed away. We’re sad to share with you the loss of these members of our United Country family: Phyllis, 66, died on March 6, and Alvin, 67, died on May 5.

“He was a great man!” We hear these words used to describe people all the time at eulogies. In this case, the words don’t seem to give justice to the man we knew as Alvin Beadles. Alvin was a true gentleman, a kind and loving husband, father and grandfather, a humanitarian, a missionary, a mentor, an inspiration, a teacher, a well-read super salesman who was thoughtful and caring and, most of all, a devout Godly man. That’s a lot to say about someone in one sentence, but for those of us who were lucky enough to have known him, worked with him and spent time with him, we know it’s true. Alvin was a great friend who, when we asked how it was going, always responded with, “It’s a great day!” God blessed us with Alvin Beadles and now that Alvin has gone to heaven, when God asks Alvin how things are going, he can cheerfully respond, “It’s a great day!” And so it is. Rest in peace, my friend. You deserve it. ~ Mike Jones, president, United Country Auction Services

Alvin and Phyllis were both wonderful people and great additions to our United Country family. They will be missed.

Alvin Roy Beadles was born to Roy Harrison Beadles and Frances Irvin Beadles on January 18, 1943, in Clinton, OK. He met his wife and best friend, Phyllis, at Oklahoma State University, and they were married May 20, 1966. He lived his life to serve his wife, family, others and most of all, his Savior, Jesus Christ. He loved kids and bringing light into peoples’ lives. Alvin graduated from Putnam High School in 1961 and later earned a B.S., M.S. and Ed.D. in agriculture, from Oklahoma State University. He dedicated his working life to the family’s farming operation, teaching agricultural education and selling real estate. He is survived by his sons, Grant Beadles, of Chengdu, China, and his wife, Joy; Justin Beadles, of Nacogdoches, Texas, and his wife, Heather; grandchildren, Lyndon and Sybil Beadles; Jack, Hudson, Rex and Riley Beadles. He is also survived by his mother, Frances Beadles of Clinton, OK; his brother, Gary Beadles of Norman, OK; his sister, Glenda Thomas of Norman, OK; his sister Shirley Lettkeman and her husband Dennis of Watonga, OK; and numerous nieces and nephews. Alvin was preceded in death by his wife Phyllis and father, Roy Beadles. A memorial service will be held at 10 a.m. Monday, May 10, 2010, at the First Baptist Church of Weatherford, Okla., where he was a deacon and active member. In lieu of flowers, donations can be made to the Oklahoma Baptist Homes for Children.