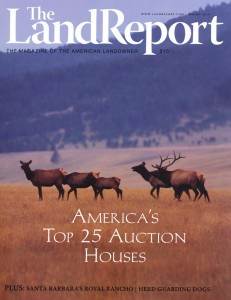 United and its affiliates conducted a staggering 1,100 auctions. Is it any wonder these guys are king of the hill?

The Land Report recently named United Country Auction Services the top auction company in the nation in the article, “America’s Top 25 Auction Houses.” The article appears in the Spring 2010 issue, released this month. United Country earned the No. 1 ranking based on land auction sales for 2009. The company closed more than $172 million in the land category, nearly double the volume of the No. 2 ranked company, which recorded $88 million in land sales.

The Land Report article says the following about United Country (emphasis added): In 2009, United and its affiliates conducted a staggering 1,100 auctions. Is it any wonder these guys are king of the hill? United Country is the nation’s largest integrated real estate and auction company and the only franchise system specializing in rural towns and cities. The organization has some 675 offices nationwide, and its affiliate program includes auction houses large and small.

Thanks to this depth, the staff of United Country Auction Services includes multiple international and state auctioneer champions and Auctioneers Hall of Fame inductees. “We currently have $18 billion of listed inventory nationally, much of which is land, and about 450 scheduled auctions in the next 90 days,” CEO Dan Duffy says. “We run and operate 1,000-plus web sites that generate 173 million hits, over 50 million page views, and 2.9 million visitors last month alone (December 2009).”


“United Country stands out from other auction and real estate companies for a number of reasons,” said Mike Jones, president of United Country Auction Services. “The biggest way we differ from other companies is our blended network of conventional and auction real estate professionals – more than 4,000 in 45 states. Add to that our market-leading technology and national marketing programs, and it’s easy to see why our franchise offices have the clear competitive edge in the markets they serve.

It’s based on these benefits that our franchise system has been awarded top honors by Dun & Bradstreet’s AllBusiness.com, the Wall Street Journal and Entrepreneur magazine, to name a few. We’re very proud to add The Land Report to that list.”

Have you used the auction method of marketing to sell real estate in your market?